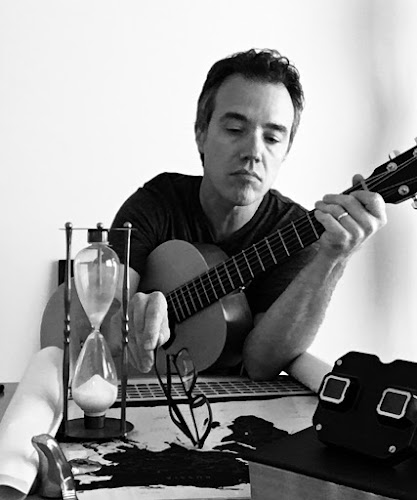 There must be something unbelievably bittersweet in releasing a piece of art into the world knowing that one of your greatest instructors in the form will not see it. Jason Wilber, guitarist for a quarter-century for the late John Prine, is releasing his latest record this Friday, and Time Traveler strikes a poignant tone that serves listeners in lock-down well, and especially so for those of us who were fans of John Prine. Wilber is his own man, of course, but the influence of the late singer is palpable here, you know?

The music here is uniformly introspective and in debt as much to John Prine as it is to Tim Buckley, Nick Drake, and, according to the song notes, Leonard Cohen and Steve Goodman.
May
26

Today Could Be The Day: A Quick Review Of The New Album From Peter Holsapple & Chris Stamey

For anyone who came of ages in the Eighties, Peter Holsapple & Chris Stamey are practically Lennon & McCartney. The work of these two in The dB's is legendary, of course, and that band's music always struck a nice balance between Beatles-inspired pop and the sort of jangle-rock being cranked out by contemporaries R.E.M. then.
May
24

The formidable machine that is Pere Ubu in a live setting is one that's been recorded in action before. While there's considerable chaos on any Ubu LP, the live ones seem to be where we get to the real heart of darkness, to use an obvious and groan-inducing reference to one of this band's best singles. By Order of Mayor Pawlicki: Live in Jarocin, out now via Cherry Red, captures a 2017 set in Poland that contains a real punk attitude in the playing.
May
23

Nothing Lasts: A Quick Review Of The New Album From Katie Von Schleicher

It's taken nearly three years, but Katie Von Schleicher has finally followed up Shitty Hits with another record. Called Consummation, the album dropped last Friday on Ba Da Bing and it reveals an expansion of what was on that first impressive release.

While some of this is sufficiently mellow, mellow enough to get Von Schleicher lumped in with any number of contemporary singer-songwriters, the more propulsive pieces here are what set this far apart.
May
23

I Think I'm Ready To Go: A Brief Review Of The New Album From Jetstream Pony

A record that's going to earn a lot of comparisons to C86 stuff, Jetstream Pony by Jetstream Pony is far more distinctive than those sorts of albums that are simply exercises in digging up the past again. Beth Arzy was in Sarah Records band Aberdeen, as well as Trembling Blue Stars among other acts, and she's got a real ear for a hook. Nearly everything on this album is centered around a strong melodic figure that anchors the fuzzy guitars.
May
22

Learning To Breathe: A Brief Review Of The New Album From Archie Shepp

The new album from Archie Shepp is extraordinary. Ocean Bridges, out today via Redefintion Records, finds the legendary sax player teaming up with his nephew, the rapper Raw Poetic, and DJ Damu the Fudgemunk, along with D.C. bass wizard Luke Stewart. The record surprises and pleases, and seems exactly the sort of thing designed to give hope during these bad times. It's also the rarest sort of mix of genres that actually works, and doesn't feel forced.
May
21

The new band Kidbug is a real super-group. I know that's an overused word but, really, this is a special project. Featuring Marina Tadic of Eerie Wanda, Adam Harding of Dumb Numbers, Thor Harris of Swans, Bobb Bruno of Best Coast, and, on one number, Dale Crover of The Melvins, Kidbug comes to us with a lot of talent behind the microphones. The group's self-titled debut will be out on Joyful Noise Recordings tomorrow and it's a lot of fun.
May
20

Metaphysical Sacrifice: A Quick Review Of The New Album From Lucern Raze

When he's not running probably the best active label in the whole goddamn world, Luke Reilly records as Lucern Raze. In previous outings, like ones reviewed by me here a half-decade ago, Lucern Raze cranked out the sort of skewed garage pop that PNKSLM is known for.
May
19

Exile To Magic: A Brief Review Of The New Album From H. Moon (Philip Ekström From The Mary Onettes)

Philip Ekström of The Mary Onettes is dropping a solo album on Friday. While the material is atmospheric, given that it is based upon leftovers from a film score, it's also richly evocative music that stands entirely on its own. Trustblood, out on Friday via Welfare Sounds, is different from the tunes of The Mary Onettes but not so different that long-time fans will be alienated.

The title cut is expansive but bleak, while "Play Me Seldom Chords" is warm and more obviously tuneful.
May
18

Slipping Away: A Quick Review Of The New Album From Nick Kizirnis

Dayton musician Nick Kizirnis has worked with Tobin Sprout but Nick's music is far more aligned with roots rockers than it is to anything from Guided By Voices. After enlisting vocalist Kate Wakefield to join his band, the newest album from Kiriznis, The Distance, out now via ATOM Records, reveals Nick's facility at crafting rich and evocative material tinged with folk rock elements.
Loading